Will Social Security be Around When I Retire?

Disclosure: Not associated with or endorsed by the Social Security Administration or any other government agency.

If you’re led to believe that you can rely on Social Security to provide what might be your only source of retirement income, that’s a bet you might not want to make. Reports from Social Security indicate their trust funds may run out by 2037, while some suggest Social Security might go bankrupt sooner. What’s the truth and what does that mean to you and your retirement money?

The fiscal facts about Social Security

If you had your heart set on relying on Social Security to sustain you in your retirement, you may change your mind. As the majority of baby boomers are nearing the retirement age, the government might be paying out more than it’s taking in. According to government officials, they have enough reserves until 2037, but benefits may be reduced thereafter. That’s according to their reports.

Others speculate that this time frame may approach a lot sooner – like in the next year or two. Keep in mind, as the government lets other branches borrow from its reserves, it may not have enough to cover Social Security and you can’t live on an IOU.

Insolvency is expected in the future

In looking at the status of the Social Security’s ability to pay retirement income, people are asking if they will get their benefits. To answer this, we have to look at the solvency, or ability to pay the scheduled money in a timely manner, from their trust funds. Their trusts are in two accounts, Old-Age and Survivors Insurance, (OASI) and Disability Insurance, (DI).

The Social Security administration states that if OASDI is exhausted in 2037, benefit reductions would drop 25%. That means you would receive 25% less money in retirement income each month. Additionally, payroll taxes would rise by about one-third, which would be a 4% rise on top of the already 12.4% rate. The next reform might include reductions in benefits and increases in payroll taxes.

Factoring in a 401(k) and IRA, these contribute to about 11-18% for higher income households and only 3-5% for the poor as they approach retirement. The wealthier and those who make investments are putting their money in accounts to have sustainable retirement money available when they know they will need it, in retirement.

How retirement money has been allocated

About 85% of seniors who receive social security have incomes that are at the lower 40% end of the total population. For those nearing retirement at top income levels, they receive about 33% of their income from Social Security. This is according to the Investment Company Institute’s study on retirees born in the 1940’s.

They also argue that to think we can rely on Social Security as retirement income is not enough to stand on even when you factor in pensions and savings. The pyramid the ICI envisions has Social Security at the bottom, not the top. Actual benefits can replace about 36% of lifetime annual earnings for the affluent and close to 58% for lower paid workers.

What does this mean for me?

If you’re near the retirement age or for anyone 55 or older, you will likely receive your full benefits. Changes and reformation discussions about Social Security project they will likely hit those under 55, where they may see a 22-25% loss in available payouts and lesser amounts each year after that.

What can I do to protect my retirement?

For anyone under the age of 55, you definitely want to start saving more. Don’t rely on Social Security to calculate your monthly payments. Instead, focus on your IRA, your 401K, the stock market and other areas where you can make the most now. Even consider starting a small business that can add supplemental income. You can also take a part-time job that doesn’t require a great deal of stress or heavy lifting. Look for something that will offer an insurance package. You don’t want to get stuck paying high premiums when you need your money the most, in retirement.

When should I retire? 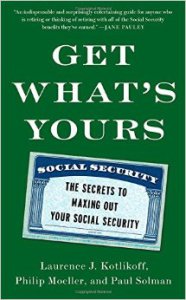 In a book entitled, “Get What’s Yours: The Secrets to Maxing Out Your Social Security

,” authors Laurence Kotlikoff, Paul Solman and Philip Moeller point out that some pension funds are under funded by as much as 20%. For people over 55 they won’t have to worry, but it’s those that are under this threshold age that may have to make other plans. For some who take full retirement at age 62, they may end up with less money.

Getting the most from Social Security

Options for some – if you can afford to wait include applying at age 66. You would then suspend your benefit. You’re making yourself eligible but not taking it until age 70. You can take a spousal benefit in the interim. This can help to give you the largest possible payouts.

There are other ways to maximize your Social Security benefits, but ultimately, you want to ensure you still diversify your interests, cut your excess spending and don’t rely on Social Security as your primary means of retirement income.

Given that OASDI is scheduled to run out in 2037, insolvency is a factor that has to be addressed. Planning for retirement can help if you factor in investments, stocks and you work with a financial planner. Will Social Security be there when you retire? It might, but the real question you should be asking is if it’s not, can you afford to live on 25% less retirement income? Because the Social Security Administration is anticipating lower payouts, factor these in. Don’t gamble with your financial future.

Disclosure: Not associated with or endorsed by the Social Security Administration or any other government agency.