Is Obama’s MyRA Good or Bad for Your Retirement?

With the stroke of a pen, President Obama directed the Treasury Department to establish new retirement savings accounts aimed at workers with limited access to traditional retirement accounts.

The signature formalized a proposal unveiled during the 2014 State of the Union Address.

Dubbed “myRAs,”—an acronymic mash-up of “My” and “IRA”—the accounts will kick-in for those making less than $191,000 a year whose employers do not offer retirement plans such as 401ks.

The Plan in Action
The myRA works like this: account holders contribute after-tax income to invest in Treasury bonds and any investment gains and withdrawals are tax-free. Bonds in myRA accounts will offer the same variable interest-rate return as those federal employees get when they enroll in the Thrift Savings Plan Government Securities Investment Fund.

The myRA works much like a Roth IRA, in contrast to a traditional IRA which is built with pre-tax contributions. But unlike Roth IRAs, the principal in myRA accounts is fully backed by the U.S. government. Minimum initial contributions are set at $25, but subsequent contributions can be as little as $5. Once the myRA hits $15,000, the participant must roll over the account into a Roth IRA. Participation by both employers and employees is completely voluntary. 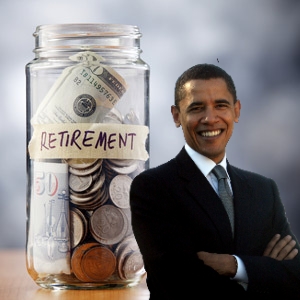 While seemingly a good start in remedying the anemic retirement savings levels of most Americans, the myRA is fraught with nettlesome snags. First, because these accounts exclusively invest in treasuries, they will suffer from low returns—earnings that barely keep up with inflation, if that.
For example, in 2012 the Thrift Savings Plan Government Securities Investment Fund had a return of just 1.47 percent. The inflation rate for that year was 1.7 percent. Assuming an annual return of 1.5 percent, it would take a typical myRA account holder contributing $50 every two weeks nearly 11 years to amass the magic $15,000 threshold. Factor in an economy growing roughly at a 3 percent clip (fourth quarter GDP, 2013) and the myRA investor is struggling to maintain adequate purchasing levels for retirement.

Second, the myRA is redundant. Workers or the self-employed can already set up retirement accounts through instruments such as SEP-IRAs, SIMPLEs, and Roth IRAs. Plus, just about any account—from a simple savings account to a 401(k)—can be set up with automatic savings or deposits. The myRA strategy seems more like a plan to sop up some of the trillions of dollars in long term treasury bonds the federal government has been buying (quantitative easing) for the last few years than it does a strategy to boost savings.

If you’re afflicted with retirement concerns—and you should be—don’t wait for the Obama myRA to alleviate your anxiety. Start now by opening a retirement account and channeling a few dollars from every paycheck into your future well-being. MyRA or no myRA, a savings opportunity is a terrible thing to waste.

Disclosure: For informational and educational purposes only. The information contained herein may contain information that is subject to change without notice. Any investments or strategies referenced herein do not take into account the investment objectives, financial situation or particular needs of any specific person. Product suitability must be independently determined for each individual investor.